August 08, 2019
It's been a year. One year ago we moved to Texas. One year ago I started asking people to call me Kristina instead of Kristy, thus adding one more syllable to my name.

August is our anniversary. Last year we celebrated that anniversary by adding a cool new memory. That day we drove up to our house, found the keys and walked inside with the kids. We spent the night in our house without any stuff. Isn't it funny how places seem bigger when they're unfurnished? And that pool in the backyard? We knew nothing about pools and maintenance but just jumped in carefree. It was great. It was like being in a hotel but with room for everybody to spread out.

Maybe it's time to explain the name change. For me, I had decided before moving to Texas that I wanted to quit using Kristy as my nickname. It served me well for many years and I still like it, but it's mainly for simplicity. When I'd first meet somebody, maybe I'd mumble or maybe I don't speak clearly enough, or maybe the strong N sound in my last name confuses things, but people would usually ask, "What was that? Is it Kristine or how do you spell your first name?" (Kristy, Kristi, Kristie) This way the spelling variations only apply to the opening letter. (Christina, Cristina, Kristina) And it sounds better when combined with my last name. Kristina Nelson. There's two "n" sounds in my last name and it gets more lyrical by adding the "n" sound in the first name.

(While I'm talking about my name, have I ever mentioned how many friends I have with the same name or a variation of it? Whatever happened in the 70's that we have so many people running around with the same name? Kristina/Kristin/Kristen/Kirsten/Kirstie etc)

However, the name change goes way deeper. I wanted to be a better, more assertive version of myself, and I wanted a permanent reminder of this goal. By asking people to call me something different than my old name, it would remind me. In conversations, I've often defaulted to a listening role. I love listening, but sometimes good listeners get steamrolled by the super talkative, and then end up being a free therapist. So in making new friends, I wanted to search for reciprocity, to find people who give as much as they take. It seemed like the perfect time to start a new chapter. To all my old friends who still call me Kristy, that's great. But if I've met you in the past year, I hope you'll call me Kristina.

(It only took me one.whole.year to figure out that I need to change my email signature to match.   Once I realized it was possible, it took less than five minutes to actually do it. *long sigh. If I resign myself to being a technodinosaur, then I'll never progress. Technodinosaur:  yes, I coined that phrase. Yes, I frustrate myself and the people around me. Yes, I learn new things slowly. But here's the good news. If my parents can learn to send and receive a text message, then there's hope for me too.)

This blog has been sleeping quietly for a year, really ever since we moved. I had to revisit why I started writing, why I'm willing to write personal stuff and put it online, and if the end justifies the means.  One of the benefits of a long roadtrip is time to think and talk. Norm pointed out that a blog could be useful in keeping up with old friends or family who are far away.

It's been very nice for me to have returned to Utah just as our one-year mark in Texas was coming up. What a blessing that I didn't know I needed, or at least, not in the way I thought I did. During July the kids and I followed a local custom:  the T-exodus. Locals pick July to head north to cooler climates.  Norm was a champ and willingly volunteered to drive it with me. I'm sure he's in it for the conversation.;) He flew home and worked while the kids and I had a marvelous time playing.  Driving through Colorado is beautiful, and one of the highlights was seeing my aunt on our way through Colorado. 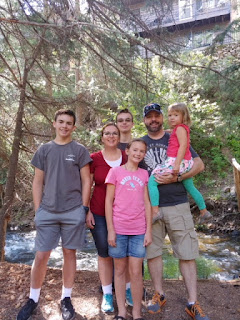 During our two weeks in Utah, my girls got a lot of attention from Grandma and Grandpa. It was fun watching my parents play Monopoly and Rook with Karly. Also, we appreciated the free room and board!

I loved reconnecting with friends in Lehi. It was good to go to church in our old congregation. To all the women who made time to talk and visit with me, I just love you. To the ones I missed, I'm hoping for some really good phone calls really soon. And, of course I'm kicking myself for the photos I did not take. 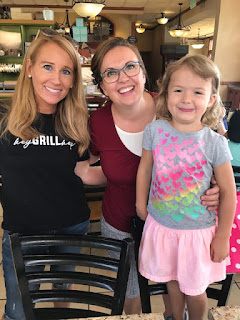 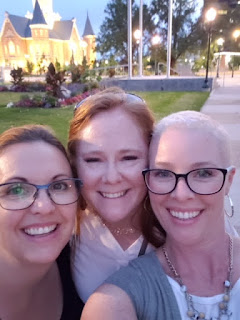 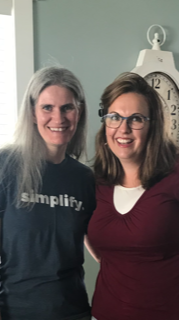 It was great to enjoy the dry air, and the mountains. On one of our last days, Karly and I joined my brother's family rafting down the Provo river. Wow, it was cold water! I had wanted to go river rafting for a long time, and at the last minute we invited ourselves along. It was so fun, I might want to do that every summer. 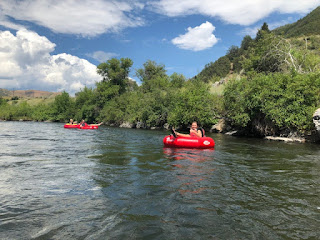 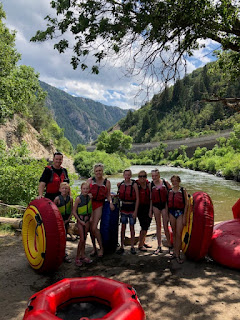 At the end of our vacation, Norm worked all day on Friday in Texas, flew to meet us that evening and we drove southeast on Saturday and Sunday. Also Yay for meeting my aunt one more time, this time stopping to share pizza in town. I love my sweet aunt, and especially how she's often called me by my given name, Kristina, through the years. 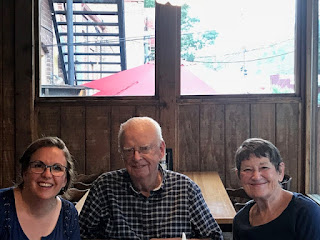 So to sum up, it took a trip back to my old home to help me realize a few things. I realized that I like having one more syllable in my name. It's been a good thing for me to be called Kristina here in my new home. But I also realized, probably for the first time, that I'm glad we moved. I couldn't have realized that before our July trip. We did the right thing, even though this past year wasn't easy. That was an understatement. This past year was significantly more difficult than we ever anticipated.  People say that it takes a year after a move, for it to feel like home. I'd say they're right.

But I love my new house, and I love a lot of things about Texas. There are wonderful people in my neighborhood, at my church and in all the different churches, in my kids' schools.  I love the southern custom of "yes ma'am," and "yes sir," and I love the way strangers are courteous to each other. I still like writing so I might do a weekly blog post, and I still love my family and friends that are far away.  Y'all are welcome to read it if you want to keep up with us.