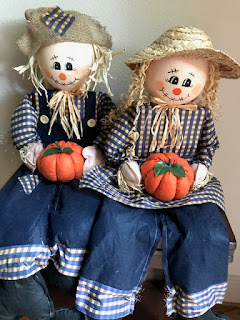 Over the past year I've noticed a lot of fun and interesting things about Texas.  Call it culture shock or assimilation, but here's an outsider's view of my new home. Obviously I like saying "y'all," and I find it quite handy. From the vocabulary to the climate, from the school traditions to the local hotspots, I'm enjoying this new land even if I poke a little fun at some of the quirks.

One of my favorite things about Texas is the people.  They are nice. The general default mode is to show kindness, warmth and hospitality. People go out of their way to help each other. I've seen this over and over again. The foundation of this town is built on people who are genuinely decent and friendly.

Language:
I love the west Texas drawl.  At the elementary school, the sweet secretary lady is the nicest. When my son delivered something to his sister one day, she said, "Thank you baby," in a motherly, sweet way. He couldn't get upset at being called a baby, because it was a term of endearment.

Another cool thing I love: it's accepted to say grace before a meal in a restaurant. If you're saying a prayer for the food, the waitress waits politely out of respect. Somewhere between the words themselves and the southern charm behind them, I really like the language here.

Climate:
It's hot and humid. But there's all this amazing stuff that grows outside. I like the flowers and trees and plants.  One day at the nursery, back in August when it was like 1000° outside, I learned about making a flower pot arrangement.  Okay, it wasn't that hot. (But why did I stop to buy mulch during the hottest part of the day?) The nursery people were really nice and gave me a free bottle of water, because everybody was glistening. Okay, that's a nice way of saying we were all drenched in sweat. The average heat index for August was about 107° and most places are cooled to about 77° F, so the 30° difference makes coming inside feel like you stepped inside a fridge.  Yay for air conditioning! September is better than August for this reason:  It's only 20° hotter outside, so we're making progress. Yay for fall!

The man at the nursery taught an important thing about making an eye-catching arrangement:  Thriller, Filler and Spiller.  Look for something tall (thriller), something to fill in the spaces (filler), and something to spill over (spiller).  Here's my tribute to autumn, with zinnias, decorative peppers, and sweet potato vine. 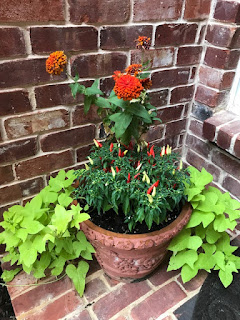 Local traditions and restaurants:
There are things unique to this area:  bluebonnets, Blue Bell ice cream, Whataburger, Fuzzy's Tacos. The TexMex food here is awesome. I love having good guacamole in my life. In fact, I think I need to do more research by eating all the great food here. So far my favorite restaurant is Marty B's.  It's ten minutes from my house, the food, the service, the queso and guacamole are all great. My personal favorite is the Texican Tamale Cake. If I'm sharing with Amber, we dump the side of pinto beans and sub in the mac and cheese. That's a home run. Some of these uniquely Texas things are not only iconic, but sources of great pride and joy to young and old, long time residents and newcomers like me.

Texas pride is huge.  There are trucks built especially tough and labeled, "Texas edition." People pay more money for this nicety, and I have no idea whether or not it's a better truck.  But no other state in the union would do this.  Can you imagine paying extra for a New Hampshire edition of your vehicle?

I'm pleased to report that during the summer, the kids and I made it to Buc-ees once.  This is a gas station destination.  They have 100 pumps, lots of land, and seriously cool stuff inside. We tasted a bunch of varieties of jerky from the nice man at the beef jerky counter, we bought slushees for the kids, we even spent a while browsing the cool merchandise. It's like a mix between Cabela's and Hobby Lobby.  I bought this awesome souvenir to put on top of my fridge. What's relevant here is not the souvenir itself, but the fact that I bought it at a gas station. 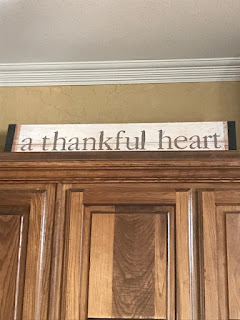 School traditions:
Let's talk for a minute about the Texas pledge. Last year when the kids first told me about it, I was stunned. I didn't know a state could have its own pledge. 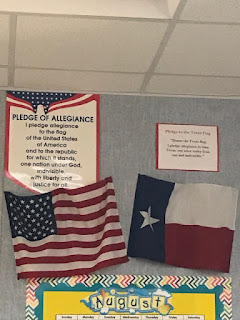 Every day the kids say the pledge of allegiance to the flag of The United States of America, and then another pledge to the Texas flag. It goes like this: "Honor the Texas flag; I pledge allegiance to thee, Texas, one state under God, one and indivisible." It's a fine tradition, just heads' up to all you Texans:  they don't do this in other states.

Moving on to an interesting high school phenomenon: Homecoming mums are like a corsage on steroids. I've never seen anything like it. The girls are given a "corsage" that is almost as big as the student, so big that they use rope to wear it as a necklace. And yes, I will encourage my boys to participate in this tradition at least once while they're in high school.

Lastly, I must mention Friday night lights. Yes, Texas high school football is a real thing. It's a community event every week during the fall. The whole town goes to the game because they know somebody in it. Believe me, I worked concessions at a home game last week, and I saw them all as I sold hot dogs and nachos. Why? Because I have a son in the Marcus marching band. All the overpriced food at the stadium puts money right back into football, band and the Marquettes. Marching band deserves a post of its own at some point, but let me say this: of all the things that are bigger and better in Texas, I've just barely scratched the surface of the high school marching band program. The depth and complexity, the level of parent commitment, the enormous amount of time and sweat the students put in, it's incredible. Pictured below is the horn section in their hot weather uniform. 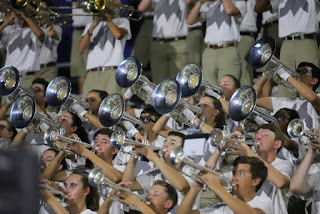 Fall in Texas is different from other places, and I've grown to respect the people here.  They are great. The culture includes supporting kids in school, whether in marching band or in making mums for homecoming. The autumn weather is more pleasant so people are actually outside again, and the sense of unity born of working together, whether eating good food or saying the Texas pledge, is really incredible. Happy fall y'all.