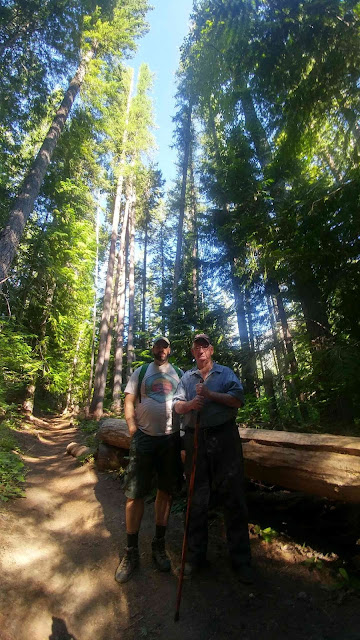 The tree that never had to fight
For sun and sky and air and light,
But stood out in the open plain
And always got its share of rain,
Never became a forest king
But lived and died a scrubby thing.

The man who never had to toil
To gain and farm his patch of soil,
Who never had to win his share
Of sun and sky and light and air,
Never became a manly man
But lived and died as he began.

Good timber does not grow with ease:
The stronger wind, the stronger trees;
The further sky, the greater length;
The more the storm, the more the strength.
By sun and cold, by rain and snow,
In trees and men good timbers grow.

Where thickest lies the forest growth,
We find the patriarchs of both.
And they hold counsel with the stars
Whose broken branches show the scars
Of many winds and much of strife.


This is the common law of life.

November 04, 2021
You know when you're at the store and one of your kids asks you to buy stuff? Then they ask again and again and again and again? My reply is usually something like, 'No, but thanks for asking.' And if they ask again then the reply goes something like, 'If you ask again, the answer will be no for like a week.' OR, "If you ask again, I'll take away your favorite toy," OR "If you ask me one more time, __________." Think of a punishment you will actually do! You can't make an empty threat here. If you don't have the energy to see it through, then just say yes. My older kids will often comment on how their younger sister gets a ton of stuff or privileges. If I'm tired and don't have the energy to win a battle, it's much better to JUST SAY YES the first time. That way, when I say NO on something, it carries more weight. So I explain to the older kids that they've already run me ragged and I no longer have the patience or st
Post a Comment
Read more

October 28, 2021
My favorite quirk about my neighborhood is this: at Halloween all the skeletons come out of the closets. This one made me laugh out loud the other day. I was mad about something, it might have been the shenanigans going on around me or in my kids' schools or I might have been miffed about all the &*&%$ going on in the Middle East or South America or whatever. But when I drove past this skeleton, it just illustrated my current view of humanity. "Got my butt in a jam," with a skeleton literally stuck in a trashcan. I love my neighbors for their creativity, for loving the kids and for wanting to give them a fun Halloween season. I love the empty nesters for storing all this crap all year long, so that during October we can drive past and see something that makes us smile. Some of my favorites this year: I think that they're trying to illustrate that a good kegger might lead to trouble. ;) The skeleton wedding makes me smile almost as much as that gorgeous blue
Post a Comment
Read more

October 28, 2021
Let's start with a fun list of opposites, skipping the usual favorites like hot and cold, and day and night. Instead here's a handful of spectacular rivalries.  Adobe and Apple Young Living and DoTerra McDonald's and Burger King Pepsi and Coke BYU and Utah TX Longhorns and OU Mercy and Justice Today my thoughts are on justice. Recently I took my girls to the dentist. My youngest doesn't love to brush or floss her teeth, she loves sugar, and hadn't been to the dentist in almost two years. After hearing good news that went something like, "Yay, good job everything is looking good..." Five minutes later I learned that there's six cavities with two more teeth that need silver caps and it will cost over $800 to fix everything. I was so miffed! Why get my hopes up before looking at an x-ray, and send them crashing down to earth after seeing the details more clearly?  When I die and go to heaven, I hope justice is Nothing like what I just experienced: I thoug
Post a Comment
Read more

A church hymn I hated for five years

August 15, 2021
Hymn #223 Have I Done Any Good? 1. Have I done any good in the world today? Have I helped anyone in need? Have I cheered up the sad and made someone feel glad? If not, I have failed indeed. Has anyone's burden been lighter today Because I was willing to share? Have the sick and the weary been helped on their way? When they needed my help was I there? [Chorus] Then wake up and do something more Than dream of your mansion above. Doing good is a pleasure, a joy beyond measure, A blessing of duty and love. 2. There are chances for work all around just now, Opportunities right in our way. Do not let them pass by, saying, "Sometime I'll try," But go and do something today. 'Tis noble of man to work and to give; Love's labor has merit alone. Only he who does something helps others to live. To God each good work will be known. Text and music:  Will L. Thompson, 1847-1909, alt. James 1:22, 27 Alma 9:28
Post a Comment
Read more

June 15, 2018
A song I've loved for years is, "You are perfect," by Pink, because it rings true for me:  I've chased down all my demons.  Or at least most of them. I've played the organ in Sacrament meeting dozens of times.  Occasionally there's a distinguished visitor or an important somebody sitting on the stand (literally two feet from my organ bench).  Sometimes it makes me nervous, but usually not too bad.  The time that freaked me out the most was when there was music professor in the congregation.  I remember having a little meltdown before church that day.  I told the Bishop, "I got a D in organ when I was in school..." and in his good natured, humorous way, he said, "We won't tell him."  Still, my anxiety was real.  I was worried about the songs, I was worried about the singing, I was worried about a lot of stuff.  Mainly, I was worried that I wasn't good enough and that somehow that music professor would agree. If you
Post a Comment
Read more