The birds and the bees 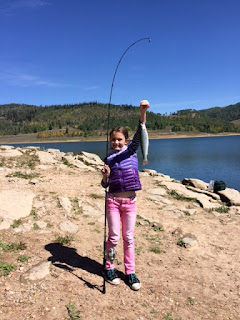 9.19.17 Karly caught her second fish! It's actually the biggest any of our kids have caught. Of course it nibbled on the line right after Norm and the boys left to go exploring. He'd explained what to do if she felt a pull on the line, and she did it exactly right. I helped reel it in, a first for me. Norm expertly removed the hook and we sent it back to live in the lake, singing to it like Dori, "Just keep swimming..." We weren't hungry and she didn't want the lesson on gutting and cleaning your dinner.
A few weeks ago I realized that Norm and I hadn't sat her down for "the talk." You know which talk I mean. With our boys, we made a big deal to start this series of conversations, sometime after they turned eight. But with Karly we completely forgot. (The idea to start this series of talks comes from Richard and Linda Eyre, you can find them here.)
And so it begins. Here are some favorite books to help with this:
Where did I come from? by Peter Mayle is one we've used to explain sex, how it works, etc. It's really old and the pictures are super outdated. I've had one friend who didn't like this book, but so far it's the best we've found. You can decide if it's right to help explain stuff to your kids.
How to Talk to your Child about Sex by Linda and Richard Eyre. They wrote a whole lecture on this topic. It's pretty great. The main point is that there are a series of discussions and not just one big talk that's one and done. Sexuality has to be something we teach our kids about frequently.
Growing Up, by Brad Wilcox. This is easy to read aloud with your son or daughter, and it's written at a level that they can read alone as well. 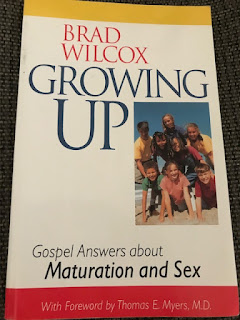 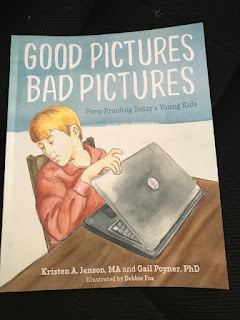 No Means No! by Jayneen Sanders. This is a body safety lesson that even the youngest kids can understand. This is especially helpful in preventing sexual abuse. As I watch my two daughters growing up in this crazy world, I want them to have a strong voice. 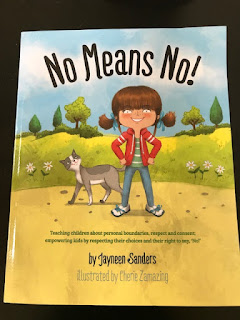 So Sunday night, Karly got to stay up the latest. We sent the boys to bed early, and had one hour with just Mom and Dad and Kid #3. That almost never happens. I told her we had some important things to share with her, and then after our talk we'd play a game. So we explained some pretty intimate stuff to my really young girl. Here's the thing. I want her to learn these details from us. Period. I don't want her wondering and asking her friends. I want her to know that life is sacred, and that her body is amazing. When she sees pornography for the first time, I want her to turn away and realize it's a counterfeit.
Norm grumbled, "Do we really have to do this?" but agreed to follow my lead, and he did a great job. Karly asked some interesting questions, and she was fine.
And then we played Go Fish.