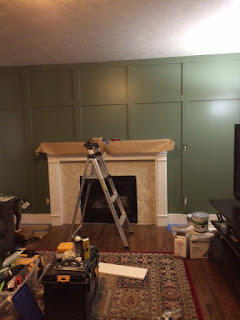 People and houses definitely have one thing in common.  We change and evolve over time.  During the summer we did some home improvements.  It started with hardwood floors that needed to be refinished.  We knew it would be painful.  All the furniture had to go live in the garage for a few days, and pianos are heavy.  So is the fridge, and the entertainment center, and the couch, etc.  After the floor was done, all the heavy stuff came back inside.  We accidentally broke part of the fridge, but didn’t realize it for a few weeks... and then it took a few more to get it fixed.  I bought a lot of dry ice during July and August, trying to keep food cold.  These are first world problems, so I kept reminding myself that most of my friends in Paraguay don’t even have a fridge.  I still grumbled, but I’m happy to report that my fridge is fixed, and the season of home improvement was worth it.  Our house was fine before, but now it's better.  I love this house.  I love the floorplan, I love the view of the copper mine, looking out the window when I’m eating breakfast.  I love the little details.

When you start one project, it often leads to another.  Because we changed the color on the floor, then the kitchen cabinets needed some attention.  When we did the accent wall by the fireplace, I learned that doing a herringbone pattern is a really intricate job.  It took two guys ten hours to cut and lay those tiles, and even then it still needed some fixing.  I never would have guessed how much work went into one small detail.  Now that the accent wall is done, it looks amazing.  I posted a photo that we took when the job was almost finished.  It's worth remembering the process.

A long time ago, when I was living overseas for a semester, my brother sensed that I was homesick, and sent this quote:  “Imagine yourself as a living house. God comes in to rebuild that house. At first, perhaps, you can understand what He is doing. He is getting the drains right and stopping the leaks in the roof and so on; you knew that those jobs needed doing and so you are not surprised. But presently He starts knocking the house about in a way that hurts abominably and does not seem to make sense. What on earth is He up to? The explanation is that He is building quite a different house from the one you thought of - throwing out a new wing here, putting on an extra floor there, running up towers, making courtyards. You thought you were being made into a decent little cottage: but He is building a palace.”
― C.S. Lewis, Mere Christianity

That season when I lived far from home was an adventure.  It was exciting and interesting, but I felt like a stranger in a strange land.    As a college student, I taught English to young children in southern China.  I got to travel and see some amazing things, but it wasn't always easy.  While I was there, a very close friend from Las Vegas died of leukemia, and I missed his funeral.  My parents and my sister went in my place, but I didn't know how to handle the grief and depression that followed.  I'm not even sure I told my roommates, but they were patient with me, sensing that something was off.  I'll always remember the kindness they showed to me, buying flowers on my birthday and bringing breakfast back from the school, on the mornings when I slept in.  Ultimately, even though there were times when I wanted to quit and come home early, I'm glad I stayed and finished the semester.  My point in telling part of the China story is this: we are all a work in progress.  We each have seasons of growth where we earn a little wisdom.  It's much easier to see progress on a house.