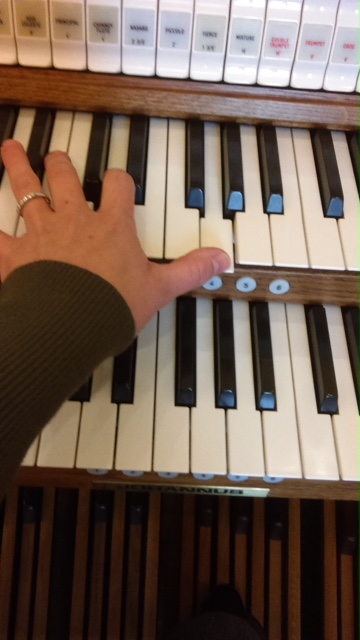 A song I've loved for years is, "You are perfect," by Pink, because it rings true for me:  I've chased down all my demons.  Or at least most of them.

I've played the organ in Sacrament meeting dozens of times.  Occasionally there's a distinguished visitor or an important somebody sitting on the stand (literally two feet from my organ bench).  Sometimes it makes me nervous, but usually not too bad.  The time that freaked me out the most was when there was music professor in the congregation.  I remember having a little meltdown before church that day.  I told the Bishop, "I got a D in organ when I was in school..." and in his good natured, humorous way, he said, "We won't tell him."  Still, my anxiety was real.  I was worried about the songs, I was worried about the singing, I was worried about a lot of stuff.  Mainly, I was worried that I wasn't good enough and that somehow that music professor would agree.

If you look closely at my old transcripts, you'll see evidence of a girl who had a lot of fun at college.  I took classes like swimming and candy making. One semester I took a group introduction to organ playing.  It was only one credit but I loved it, did well and decided to learn more.  So the next semester I took private lessons.  It was still a one credit class, but each week I met with my instructor for half an hour.  At the end of the semester, we had to turn in our practice records.  (We were supposed to practice like 2.5 hours/week but I probably spent one hour a week on the organ.)  I chose to tell the truth and hope for mercy.  My thoughts went something like, "After all, I played okay at the recital.  Surely he'll give me props for performance."  No, he didn't.  He gave me justice.  That D could stand for Dating.  See the social dance class?  Yeah, that's where Norm and I spent some serious time flirting before our missions.

But I've digressed.  Why would one grade from twenty years ago bug me so much?  I really could care less about the C+ from science.  Even the B- from a humanities class doesn't hurt my feelings.  But for a musician to get a bad grade in a music class, that's just unacceptable, right?  Why am I still haunted by that D?  D could stand for disappointed.  Or demons in my head telling me that I'm never good enough.

This next rant is mainly for friends who like music but don't play piano, or who don't understand why a musician might act like a diva sometimes.  Sometimes the accompanist gets overlooked.  Sometimes it's no fun to play a song nobody knows when nobody sings.  Sometimes it's frustrating to get to church and find out the songs at the last minute.  If I do a great job playing, if it sounds effortless and easy, it's because I practiced and had plenty of time to prepare.

It's common in a lot of wards to have 5-10 people who are super talented and willing to do all the music jobs.  We play musical chairs with the different roles.  ie one person leads the music in primary and one person plays piano in RS and one person is the choir director.  Then when we get burned out, we do one of these things:  move (and don't tell anybody you're musical), ask the Bishop for something new, or go on strike.  But here's the thing.  There's way more than a dozen good musicians in most congregations.  There's probably 10-20 more people who could step up, if they were given adequate time to prepare.  But for a beginner to join the ranks of the noble, unappreciated core, that's a difficult thing.  End of rant.

Here's the thing.  I love music, and I love church.  And, some of the most powerful moments of my life have happened when the two combined:  when an amazing song touched my heart, gave me courage, or reminded me of compassion.  The moments when I've been absolutely certain that there is a merciful God in heaven who knows my name and cares about me personally, those moments have usually come during a song. 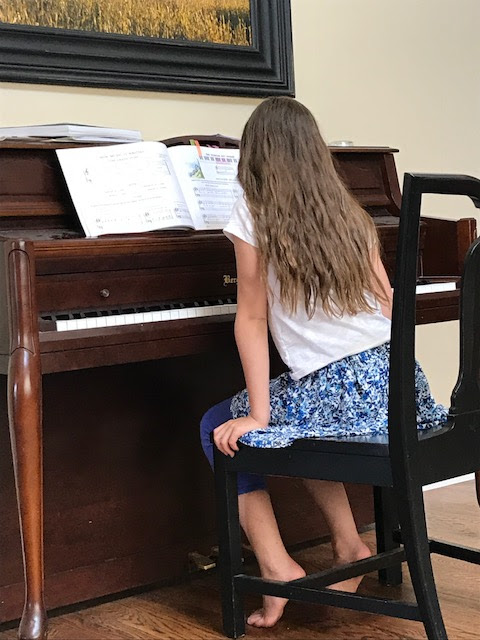 Last week my Karly girl started taking piano.  I intentionally chose not to be her piano teacher.  I love piano, and I love my daughter.  But I'm still a recovering perfectionist, and as a mom I want to be careful not to pass that down.  Somewhere between getting the right note, the right rhythm and the right everything, musicians have to be careful not to take perfection too far.

And I already messed up.  She was so excited for me to watch her play the songs that she'd memorized.  She got all the notes right but totally screwed up the rhythm.  She was proud of herself, and what did I do?  I told her about quarter notes and half notes, and she said, 'my teacher didn't teach me those yet..."  And I had to remind myself that Karly did an amazing job with one week of lessons.  The next day I apologized for making her cry, and told her that I'd been a bad 'piano mom' and that next time I messed with her, she needed to remind me not to be a bad piano mom.  She's on her own.  Her teacher can deal with whatever mistakes she makes.  I get to listen and watch her learn.

And that is a good thing.  So to recap.  I am enough, even with my worries and fear of failing.  It's okay to mess up, making mistakes is part of being human.  Beauty in life comes from the contrast, and beauty in music comes from the dissonance.  When it's finally resolved you get this amazing sound.  Maybe that's a little like when you finally chase down all your demons, and then there's this peace from knowing you're enough.