June 08, 2018
Cade earned his Eagle Scout award.  We are so proud of him!  He learned a lot of leadership skills in the process.  Last fall he ran his service project.

On choosing a project, I had a handful of great ideas that my son didn't like, everything from helping refugees to raising money for a homeless shelter in SLC.  Because Dad was the scoutmaster, he also weighed in and vetoed a few ideas.  Ultimately Cade had to pick who he wanted to serve.  It had to be his project, not mine.  Here's a list of project ideas.  Last summer we learned about a local program that combines the best of horsemanship with therapy for kids.  Courage Reins is in Highland, and they have amazing horses and people.  But keeping a horse is incredibly expensive, so they rely on donations.

We helped Cade start a fundraising site with youcaring.com.  His goal was to earn over $2100 to buy 10 tons of hay to fill a barn.  Thanks to the generous donations of friends and family, he made that goal.  Also noteworthy here is that he pounded the pavement, going door to door passing out flyers, visiting people in person, etc.  And then he wrote thank you notes to every single person who helped.

He organized the men and boys in our area, coordinated with the hay guy, and everybody met one evening after harvest to unload the hay.  Timing was critical, because once the hay is cut, it needs to get inside before a storm.  October 3 was a beautiful evening.  One of the last minute details that Will (the CR director) suggested was getting dust masks, because once the hay flies, it give a whole new meaning to hay fever.

(Quick note about the photos.  I'm not skilled with a camera, and these were taken on an iphone 5 with a two year old underfoot.  Maybe we should have asked somebody else to take some pictures that night.) 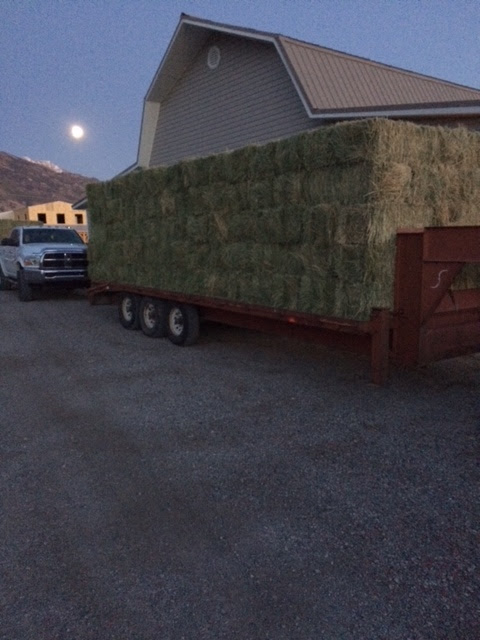 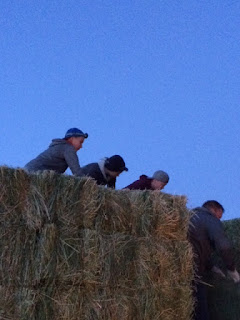 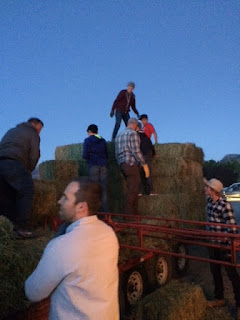 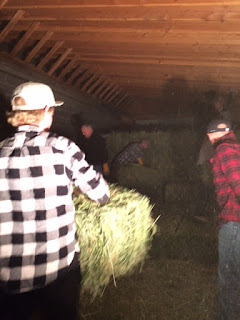 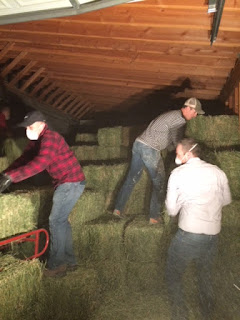 Then it took forever to finish the paperwork and get all the details in order.  He had a handful of people write letters of recommendation ( I wrote one, Bishop wrote one, one letter came from a  family friend and another from a teacher at school).  Cade worked with a great Eagle Coach in our area, one of those guys that lives and breathes scouting.  He was kind enough to spend a lot of time with us.  Then came the review board, waiting for the certificate to come in the mail, and finding a date for the Eagle Court of Honor. 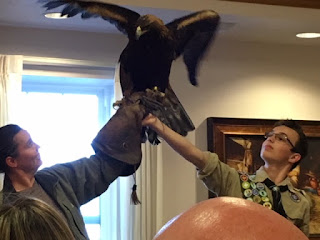 April 22 we had Cade's Eagle Court of Honor.  It was a wonderful evening, and we were thrilled with everybody who came to support him in this achievement.  One of the distinguished visitors (shown above) was Gondo the golden eagle from Skyking birds. 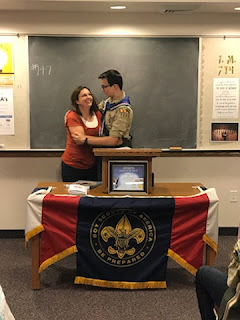 We rented decorations from the BSA shop.  It costs $25 to borrow a huge tub of flags, posters, etc.  And of course they looked great but I forgot to take pictures.  Some friends offered to help with refreshments, and I gladly accepted.  They made cupcakes, we bought donuts from our neighbor's donut place in Lehi.  Norm designed the program.  I figured Cade went to all the trouble to run his project, so Norm and I could take care of the details for the Court of Honor.  I also learned that some people go crazy planning these things. Here's a bunch of court of honor ideas.  We chose to do it at the church because it's big and free and convenient for everybody.  But you could do a court of honor up the canyon, in your back yard, etc. 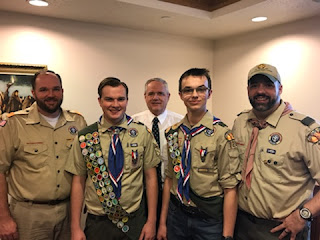 One BSA tradition is to have an "eagle's nest" with men and boys who have earned this rank.  We didn't follow that exactly, but here's Cade with his,dad, cousin, uncle and grandpa.