February 2021 was pretty cold in north Texas. All these months later, I'm finally taking a minute to write about it. 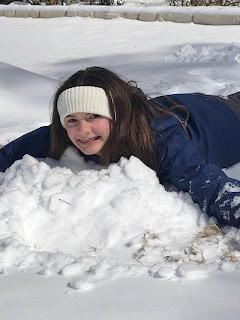 In the great state of Texas, there are almost NO snow plows so people couldn't drive anywhere. Without transportation most stuff shut down. Norm was one of the exceptions, working for a business that has a 24/7 call center, so he never missed a day of work and was able to drive in safely each day. School was cancelled for five whole days, and we figured the kids would have some days added on to the end of the schoolyear, but since it was a "state of emergency" the days were forgiven. 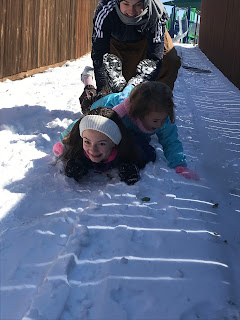 It wasn't all fun and games though. The rolling blackouts were initiated to keep the power grid from shutting down entirely. We have a newfound gratitude for electricity.  Pictured below is one night when we ate dinner in the dark. I'd just finished some kind of soup on the stovetop so it was hot. 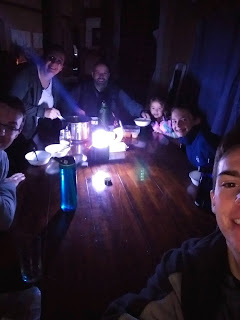 There were many families who had no power at all, and others who had no water. One day we took all our empty water storage containers and filled them with tap water, just in case. When we heard of people without water, we were able to share. We kept our faucets dripping, and covered the windows with blankets to keep the heat inside. We kept the attic door open (making the upstairs even colder) to keep the water heater and pipes from freezing. Our furnace would reset itself each time the power blinked off, so Norm woke up multiple times per night to restart the thermostats.

Let's talk about pools for a minute. By running the pool equipment, the water keeps circulating through the pipes so they don't freeze. Until there's not enough power and it seems like a crime to use the precious electricity to run the power hungry pump. A few days into Snowmageddon we made a difficult decision: drain the expensive equipment and cover it with a tarp, and hope for the best. We tried to break up the ice chunks so we didn't get a solid sheet of ice over the pool. Ultimately, our family was incredibly blessed and we didn't have costly repairs on the pool. (But think of the guy who owns a pool business. Last year most manufacturing shut down due to Covid, then the freeze drives up demand for new equipment and parts. Then there's a chlorine shortage so the cost of chemicals goes way up. What a year.) 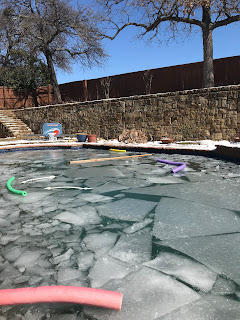 One day it was freezing, and the next it was like 70* outside. The snow and ice melted fast and things started returning to normal. But all these months later, you still see evidence of the freeze. We have friends who are "homeless" or displaced because the water damage from burst pipes was so great. Five months later, and they're still living in a hotel or apartment while waiting for repairs and renovation.
In my neighborhood about twenty years ago, MANY homeowners planted Hawthorne bushes. They were all diseased but hanging on, but the freeze finished them off. When spring came and everything started turning green, we watched patiently hoping for signs of life. Nope. My front yard has a section with new landscaping. Funny how supply and demand works. Everybody needed new bushes so the nurseries kept running out of inventory. We decided to make some improvements to the inside of our house as well. We added new insulation to the attic to make our house more efficient in the extreme heat and cold.
The estimated cost of damage from this winter storm is around $295 billion. (see link for article) For Texas power plants to winterize properly it's estimated to cost $5-20 billion. I sure hope they decide it's worth it.