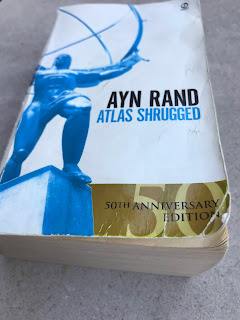 I've loved this book for over a decade. I've read it at least a dozen times, and it's finally time to write a book report.

Once upon a time, my husband took a philosophy class in college. They read a lot of good stuff, including Sophie's Dream, etc After reading Atlas Shrugged by Ayn Rand, he suggested I might like it, too. I took one look at the tiny font size, massive amount of pages, and even went so far as to read the first page of the book, then shrugged and said something like, "yeah right."

Fast forward about ten years and my then-stagnant brain needed something to chew on. I'd taken a speed reading course at UNLV once upon a time, and it came in handy, because Holy Cow, there's a lot there. But after falling in love with the leading lady, I was captivated.

Who is John Galt?

Who is Ayn Rand?

Be There at the Crossroads

August 23, 2022
Last week I was looking through an old box, searching for letters that Norm and I wrote to each other before we got married. I didn't find the letters but instead found an old journal from 1987. Look below and see my handwriting when I was a ten year old girl living in San Diego. We’d just moved there from Grand Junction, and I talked about missing our cat, about making new friends, going to Disneyland with my dad and my brother. It was really fun to read through this old journal. I'm glad I wrote that stuff down!  In the middle of these memories from 1987, I was also searching for a quote about mothers and their great influence on their kids. And the quote was something like “be there at the crossroads” when your children are coming and going. Turns out that the quote I was searching for also came from the late 80's. A brilliant church leader and prophet, President Ezra Taft Benson, talked to the women and spent time encouraging and reminding us why motherhood is impor
Post a Comment
Read more

August 20, 2019
My parents recently celebrated their 50th wedding anniversary. CONGRATULATIONS! Fifty years. An anniversary like this is remarkable for a few reasons: to stay together that long, to both be alive and well, and to still like each other after all these years. Let's take a quick trip down memory lane first.  My mom and dad met at a college dance.  When my dad proposed, he was working at a ski area, and she was skiing that day. My dad taught me to ski when I was a girl, and he taught me to love the mountains. My mom taught me to love the ocean. Marriage is a funny thing. In our culture we make a big deal about the wedding and plan expensive parties and receptions. But the real work begins AFTER the ceremony. Anytime my father-in-law talks about attending a "Wedding Deception," I have to laugh and cringe at his dry wit. I learned many great life lessons from my parents through the years. My mom taught me to serve, saying, "You love the people you serve."
1 comment
Read more

Hair and random thoughts from a Brunette

January 26, 2022
Recently I've thought quite seriously about doing this to my hair. It might be so fun to have purple/blue highlights! I never dyed my hair in high school or college. Then when I was 37 the first few grey hairs appeared, ironically enough while I was pregnant. I've spent the last handful of years adding lots of blonde highlights.  Now my hair has a respectable amount of silver. It's kind of annoying. I'm learning to say farewell to being a brunette, because that young girl with the dark hair has grown up. Last month for Christmas, one of my favorite gifts that I GAVE to my little daughter was kinda fun. I spent like 20+ minutes at Target deliberating on which Barbies to buy. Finally I chose this group of friends for their amazing variety in hair!!  And I love each for different reasons. The dogwalking blonde is fun because my daughter really wishes we had a dog. The other three have accessories to be an astronomer, a teacher, etc. Ultimately, each Barbie is different fro
Post a Comment
Read more

How Controlling Are You?

January 27, 2022
Life is like Mario Kart. In the early levels, you're driving through Moo Moo Meadows and the grass is green and there's cows and fields and it's lovely. There's an occasional banana peel that gets tossed in the path, and sometimes the cows walk in the road so you try not to hit them. But overall the driving is pretty mellow.  Then later after you've unlocked other levels, there's stuff like Bowser's Castle. It's a maze with lava on both sides of the path, there's fire and brimstone all around, there's stone columns that try to smash you at random intervals. Just to know where to go and how to steer and stay on the path is complicated. Some stages of life are like Moo Moo Meadows. The details are easy-peasy and you just keep moving right along. And then there are years like Bowser's Castle where it's pretty intense and you pray a lot because the fire around you is pretty hot and you're trying not to fall in the lava pit.  During years
Post a Comment
Read more

September 20, 2020
You know how life gets kinda messy sometimes? My version of messy looks like this: Four kids including a teenager learning to drive; a kindergartner learning to get herself ready in the morning; a senior learning about adulting; a middle schooler learning to ride her bike to electives every other day, a mortgage husband's career VIRTUAL PLUS church service pandemic, civil unrest, election year my own personal need for friends and connection even when my schedule looks like a revolving door Our big anniversary was last month and we were lucky enough to celebrate together this past weekend. We managed to sneak away for 24 hours. First I need to give credit where credit is due. There was a very generous friend who volunteered to parent the children during our 'Nelson marriage offsite.' And there was a generous benefactor who donated Marriott points to spring for the fancy room. I won't mention either party by name, but thanks to their generosity we had a great time. I'
4 comments
Read more

It doesn't matter where you live, but how...

October 02, 2018
Thoughts on Houses This is my first post from Texas.  The blog lives on.  August was a whirlwind, September we started settling in, and now it's October.  Most of the boxes are unpacked.  Just last week I found the box that had cookbooks in it, and that makes me pretty happy.  I still haven't made whole wheat bread or cookies since we got here, but maybe I'll do that soon. We spent a lot of time this summer thinking about houses, getting ready to sell our house in Traverse Mountain (in Lehi, on the northern edge of Utah County), and brainstorming on what we'd need in a house in Texas. On the way to Texas, we drove south through Colorado and spent the night at Mesa Verde.  We found the Far View Lodge inside the park and stayed up high on the mesa.  The night sky was pitch black away from the city lights, and the weather was at least ten degrees cooler up high.  I loved it.  The next morning we learned a lot about the Native Americans who lived there.  A man ga
2 comments
Read more