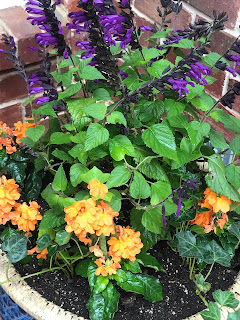 Earlier this year the Hawthorne bushes in front of my house died. They'd been alive for about 20 years, their full life expectancy, and had a fungus or disease in the soil or branches. And then the February freeze (see here) finished them off. I didn't know that for sure, until a few months later when they were still a bronze/copper color. Well, I love copper but they were supposed to be turning green. Research and word of mouth amongst the neighbors who actually know something about Texas shrubs= yup, they're dead. Time to pull them out. Here's a quick reminder of what they used to look like from when I wrote about Halloween over here. 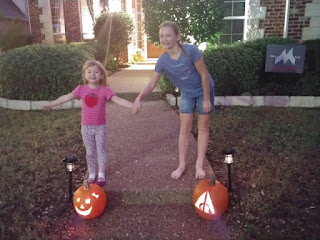 So one day during spring break (2021) I hired two teenage kids for cheap (I offered like $100 to get the dead roots and branches) and had them start at the job of hacking away the dead, brittle branches.  They had a blast for like an hour and then were like, "This is lame." Okay, their language was slightly less mature than that.;) So I showed mercy and paid them each like $10 for their 90 minutes of work; then searched around for somebody to hire to pay to get at the nasty root system underground. LONG story short: eventually the garden was clear and ready for planting again. Along the way there was a broken sprinkler pipe, and the price of new shrubs went up (supply and demand) and finally one day months later, I dragged myself to the nursery to try and figure out what to put in the front yard. I do NOT like making decisions about stuff because I second guess and then wonder, "will this be worth the investment?" or "what if these get too much sun or not enough water?" etc. Mainly, I needed to get something in the ground before the heat of summer would scorch it. Now at the end of the summer you can see where the golden marigolds grew really well, and the new yellow/green bushes are still alive. *sigh of relief (side note: Don't look too closely at the holly. One day during the 2020 fall election season when I was pretty stressed/frustrated/angry, I took some clippers and very aggressively pruned those bad boys back.) 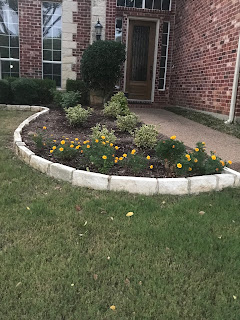 During the winter and spring, we did more gardening in the back yard too, removing almost all the dead rosebushes. They too had been plagued with an airborne disease not entirely unlike Rona, a disease that impacted almost all the rosebushes in my neighborhood. So at least I took comfort in being part of the collective defeat in the rose-bush losing battle.
BUT we kept one rosebush that was still hanging on, so I decided to let it wait and see if there was still some life left. We planted new stuff in the backyard and it looks pretty decent, even though I don't love pulling weeds. During the summer it was good for me and the kids wake up early and pull weeds together sometimes. That's like a childhood tradition, right?
So fast forward a few months and my MIL has passed away. She loved roses. The day after I got the news that she'd passed, the kids and I set out to clean up the garden. My biggest boy worked harder than three of the other workers combined, and with his help I decided that it was better to clear it out and start anew. It was time for me to let go of the dying rosebush. 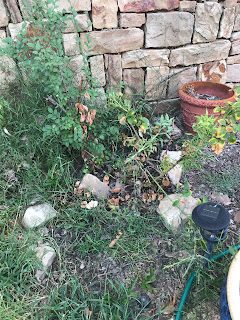 Remember when I wrote about roses and thorns over here? I was surprised that even after I'd cut off the living branches, the thorns still had power to sting. Then a few days later we flew to WA and paid our respects to my mother in law (see here to get to know Mary better.)
There was a whirlwind weekend of travel and grief, mixed with memories and hope and even laughter, with loved ones gathered together to remember. We all chose to wear bright beautiful colors to the funeral, because that's what she'd want. One of my favorite moments of quiet was walking around the neighborhood, and seeing the bright golden beauty from August flowers and a yard sign that I love. 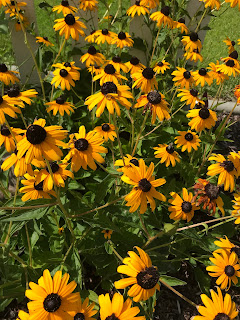 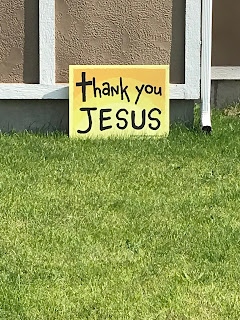 In my neighborhood it's common to put signs up in your yard, showing support for your favorite team or sport or school program or church. I'd never seen this bright yellow one before, but it touched my heart and helped me remember the gratitude I have for Jesus Christ. Because he overcame death, I know we will be with our loved ones after this life. I'm certain that Mary is fine now, and watching over her posterity from above. I'm also certain that families are forever, and that this sacred unit continues into eternity.
Fast forward a hot minute and we catapulted into the back-to-school frenzy. Finally one morning it was quiet and I had time to get this blue flower pot ready for something new. This time I knew exactly what I wanted and which colors to choose. 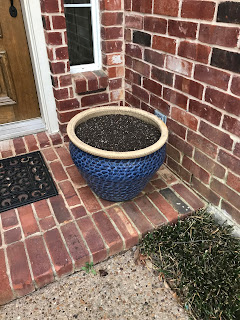 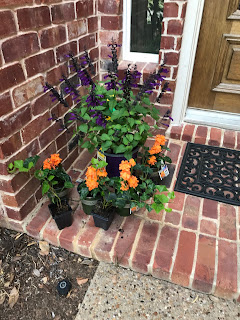